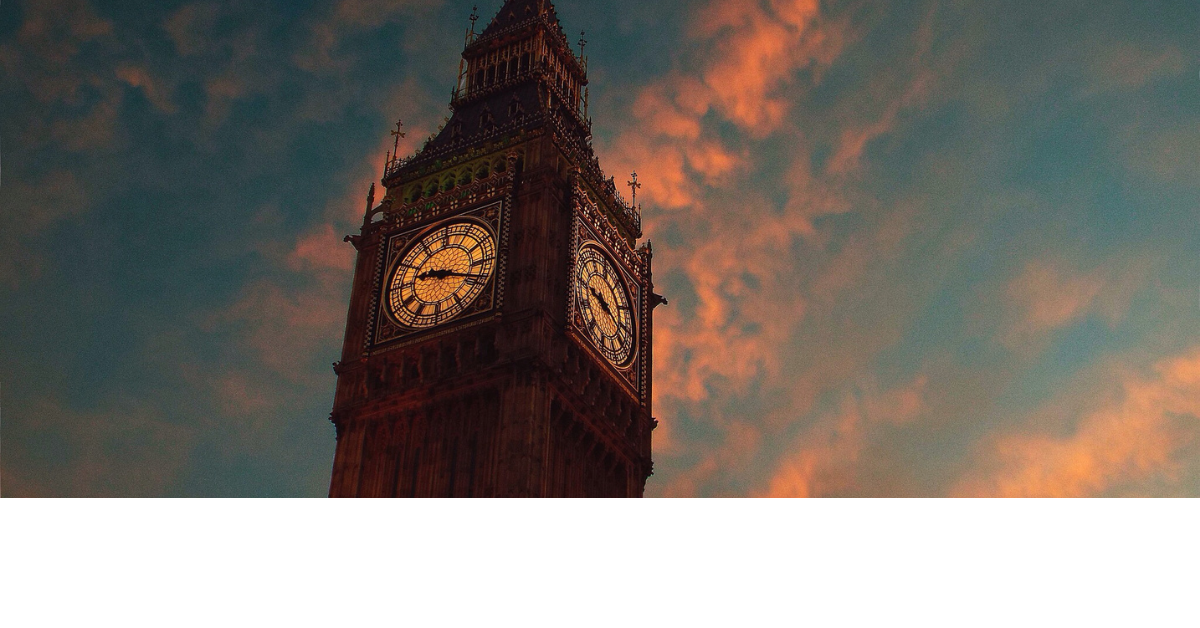 Even a Broken Clock Is Right Twice a Day

What. A. Year. Thinking back on what took place over the course of 2020, it’s hard to find words to adequately describe the experience. We doubt that anyone could have predicted half of what actually occurred, although many certainly tried!

Since the start of human history, we have been making predictions and have built up our instincts to give us the best chance of survival. However, when those instincts evolved, the problems that faced most of us looked very different than those that occurred in the modern world (for more on that topic, check out our recent blog, “Tune Out the Noise”).

The result is that we often jump to conclusions based on the first answer that comes to mind — it’s the “tip-of-your-nose” reaction. What’s that? Try answering this: “A bat and a ball together cost $1.10. The bat costs a dollar more than the ball. How much does the ball cost?” Most people, without thinking too hard, would answer “10 cents”. But is that answer correct? Think about it a little more and you’re apt to realize the first conclusion was wrong and the actual answer is “five cents.” This simple example illustrates that the reality often ends up being quite different than the original prediction.

Of course, that doesn’t stop us from making predictions. We think that problems start occurring when we take the tip-of-the-nose reactions too seriously without giving further consideration to second- or third-degree consequences.

Recently, our team book club read Super Forecasting: The Art and Science of Prediction by Philip Tetlock and Dan Gardner. We have found that our book club is a great way for us to expand our horizons and bring a different perspective to what we do every day. This book was certainly no exception! Reading this book now seemed apropos because every December, the predictions start rolling in for what the coming year will bring. Flipping through some of these predictions with a super-forecasting lens led us to realize how many market predictions are actually hard to prove or disprove.

Take the idea of “probability”: If someone says there’s a “high likelihood” of something occurring, do you expect that to be equal to a 70% chance? Or maybe it’s closer to a 90% chance? Now think about whether your neighbor or someone from another country might answer that a “high likelihood” equals the same percentage of probability that you predicted. One prediction we saw indicated that next year, “negative interest rates will become more the norm.” But what does “norm” mean here? If one more country has negative interest rates next year, technically that prediction is correct. But would it be considered “more the norm” overall?

With this in mind, we thought it might be fun to revisit some of the predictions from last year to see if they actually came to fruition. After all, we thought most of what happened in 2020 was completely unpredictable!

From Bloomberg Opinion: “The US stock market will continue to rise through the first half of the year, bringing several new highs. As the political conventions approach during the summer, the market will begin to stutter. When the election season reaches full swing, we will see a significant drop, which the left will call a collapse and the right will call a correction. After the election, the markets will rise sharply.”

As we all know, the US stock market did not rise through the first half of the year. In fact, the Dow Jones Industrial Average (DJIA), the S&P 500, and the Nasdaq suffered their first bear market in 11 years; it was also the fastest bear market from all-time highs in history. After that steep decline, however, the equity markets have resumed a fairly steady upward march, mostly unswayed by protests or election news. Just five months after their March decline, stocks were again pushing into uncharted territory, and while the market is up since the election, we wouldn’t say its run in the last month qualifies as “risen sharply.”2 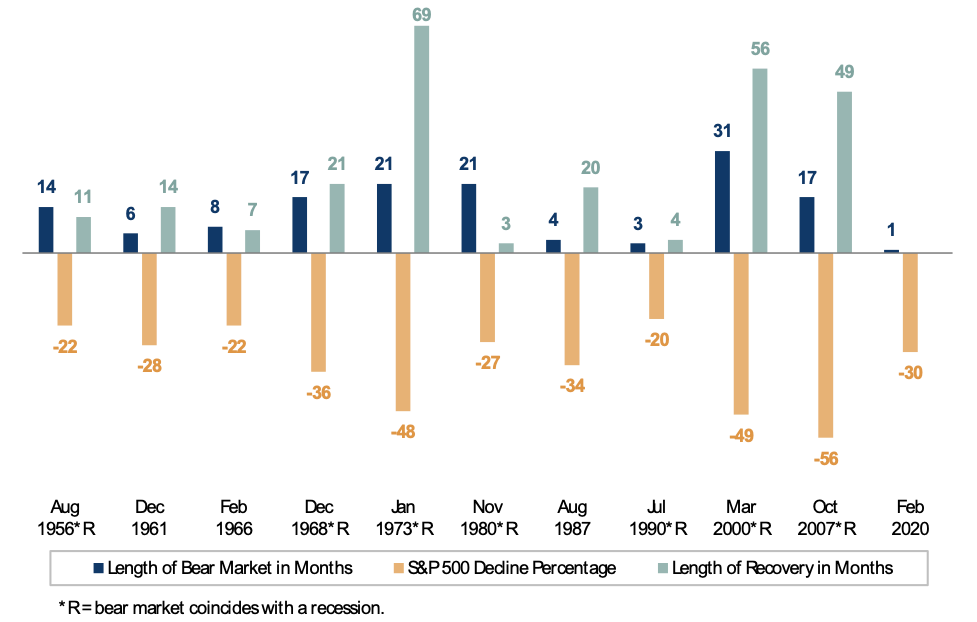 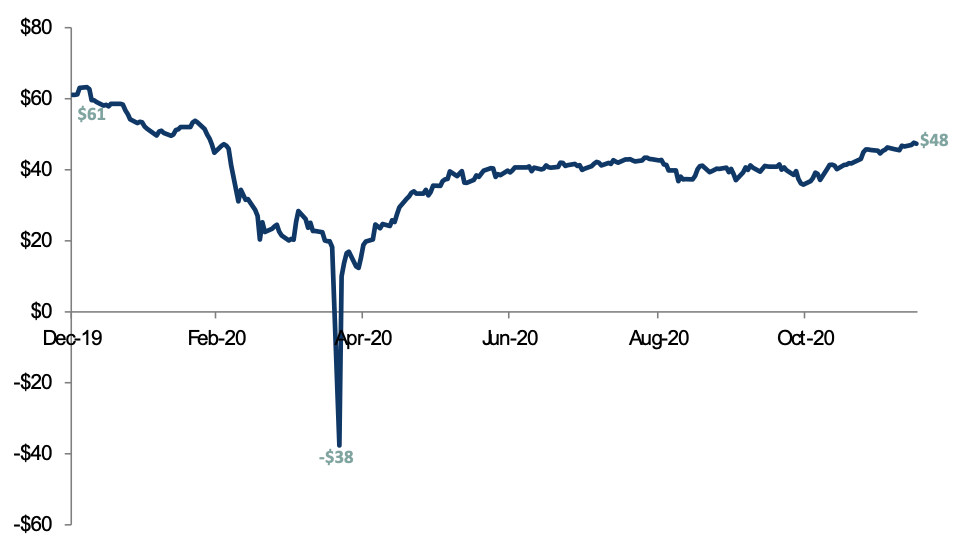 COVID-19 and the various “shelter in place” orders that governments implemented worldwide led to an unprecedented decline in carbon dioxide emissions. During the first six months of the year, an international team of researchers found that 8.8% less carbon dioxide was emitted than in the same period in 2019 — a larger decrease than during the financial crisis of 2008, the oil crisis of 1979, or even World War II.3 While the figures aren’t yet finalized for the entire year, and there was an uptick in movement in the second half of 2020, preliminary figures are showing that the world has cut its carbon dioxide emissions this year by 7%. There is hope that, even with emissions expected to rise after the pandemic, 2019 will prove to be the peak of carbon pollution.4

Predictions, while they can be fun, are hard to make accurately — especially when you’re predicting events far into the future or with specificity. There is evidence that with practice, you can get better at making predictions, or at least in asking questions with a more knowable answer. However, making investment decisions based on predictions can have a long-standing impact on your portfolio and luck might have a large hand in whether that results in positive or negative consequences.

History continues to show that setting long-term financial goals, developing a methodical plan, and sticking to your investment strategy, even when the outside “noise” is loud, will increase your chances for financial success. At Garrison Point Advisors, we believe that having a partner to help keep you accountable also increases the chance that you will attain your financial goals — and we’d be thrilled to partner with you on your financial journey. Contact us today to learn more.